After the course on deep snow and northface of the 12-13 June, we were feeling ready for flying on our own. Fletschorn north face was in perfect conditions, challenging enough but not too risky. Starting from Simplon village (Eggen), we reached the bivouac Piero de Zen on the Sunday afternoon.

The access to the bivouac was still half covered in snow, and the caban clearly suffered from lack of care during winter. Thomas transformed in Cinderella and after some efforts the bivouac was dry and clean. By the end of the day, we were 8 persons in this small caban. Quite warm and cosy for the less. We had a 3 stars dinner; brocoli soup, tortellini with fresh rucolla and parmigiano, and vermicelles with last minute home-made whiped cream… never seen before in the history of bivouac food. 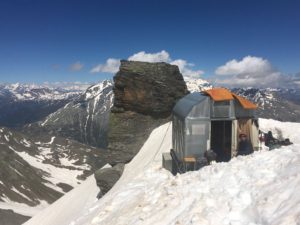 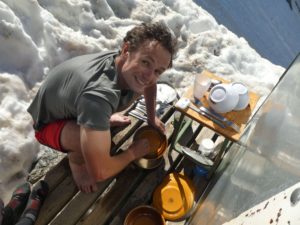 Monday morning, we left at 3.45am, arrived at the rimaye by 4.30am, took the rope off, and started the 700m ascent. The first half of the climb was quite easy (40°) and ended once we reached by the left a nice rock platform. 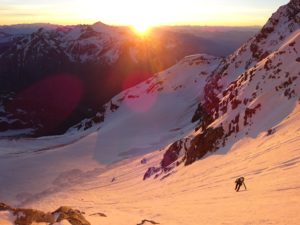 Sunrise in the first half of the ascent

The second half was magnificent and honnestly easier than we thought, thanks to the nice foot steps to the exit. But still, the steepness (50°), the exposure when you look down at the 700m under yourself, the serac falls on the side and the icy section in the last 10 meters of the face were enough to make us stay really focused. (Some people ski that down, we saw proofs). 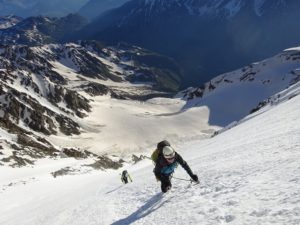 Thomas was leading most of the climb 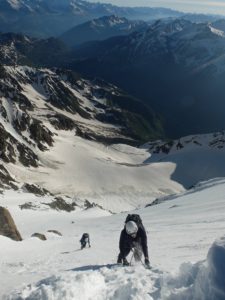 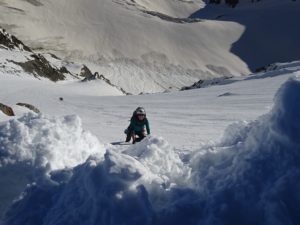 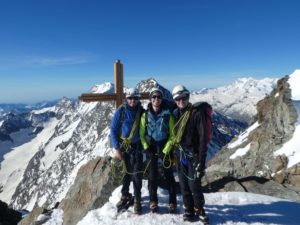 The summit was then close, and we gave up on an option to continue to Lagginhorn due to bad stomach, to return in the valley through normal route. This tour was so much fun. Definitively ready for more north faces next year.